Home » Olive Oil » What to know about the Mediterranean diet, ranked best diet of 2023
Olive Oil

What to know about the Mediterranean diet, ranked best diet of 2023

The diet is endorsed by the American Heart Association for its cardiovascular benefits. The diet was shown to reduce the risks of adverse pregnancy outcomes like preeclampsia, gestational diabetes, preterm birth and stillbirth when followed in pregnancy, according to one study.

“Any plan that cuts out an entire food group or fruit or dairy for non-medical reasons is a red flag and it’s the reason the Mediterranean diet is always such a big winner,” Gretel Schueller, managing editor of U.S. News and World Report, told ABC News. “The Mediterranean diet is healthy, it’s sustainable, it’s a flavorful way to eat and it’s adaptable.”

What is the Mediterranean diet?

The Mediterranean diet is not one way of eating but a broad term used to describe the eating habits popularized in the countries bordering the Mediterranean Sea, including Italy, Greece, Morocco, Spain and Lebanon.

The way of eating focuses on the quality of foods consumed rather than focusing on a single nutrient or food group, according to U.S. News and World Report. 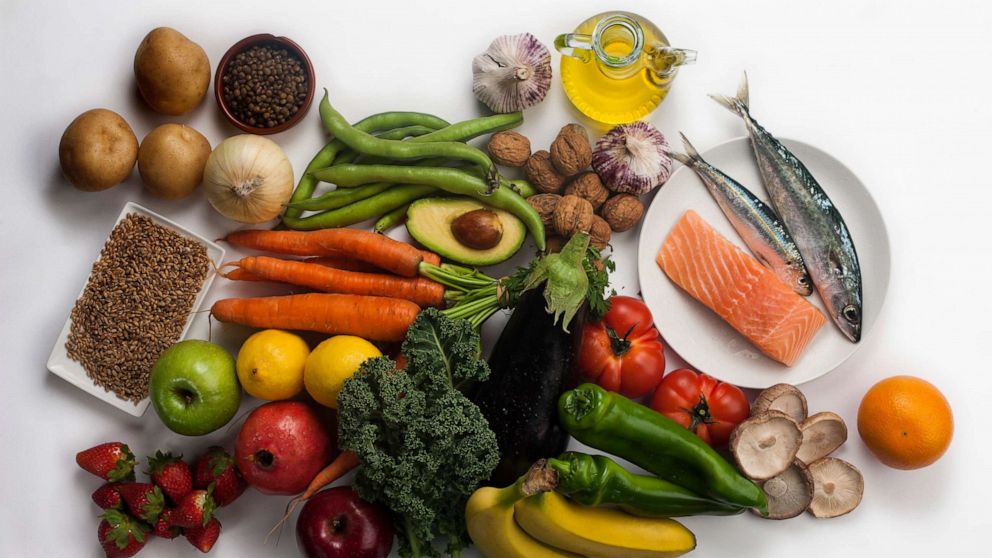 There are no specific serving size recommendations or calculations with the diet, meaning the amount of food a person eats on the diet depends on their own needs.

Nutrition experts say there’s no one diet that will work for everyone. Certain diets may be more beneficial depending on your circumstances, and some may be harmful depending on your health conditions. Anyone considering changes to their diet should consult with their doctor.

What types of foods are eaten on the Mediterranean diet?

Overall, the diet is mostly plant-based and focuses on healthy fats. 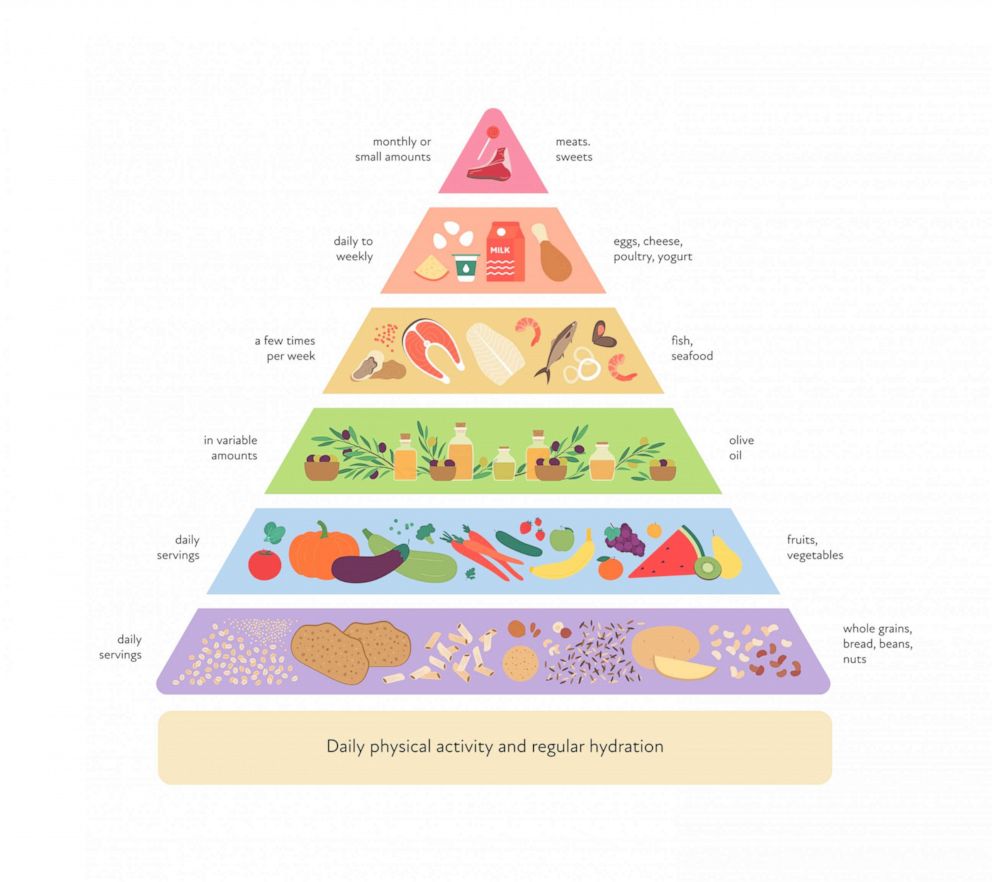 All types of vegetables and fruits are encouraged on the diet, as are non-meat sources of protein like beans and other legumes.

Fish is encouraged twice weekly and other animal proteins like poultry, eggs, cheese and yogurt are encouraged in smaller portions, according to the Harvard School of Public Health.

The main source of hydration should be water.

Are any foods prohibited?

No, the diet does not totally eliminate any foods or food groups.

Some foods though are encouraged sparingly on the diet, desserts, butter, heavily processed foods like frozen meals and candy and refined grains and oils.

U.S. News and World Report describes the diet as leaving “little room for the saturated fat, added sugars and sodium that inundate the standard American diet.”

What are the health benefits?

According to U.S. News and World Report, “People who eat a Mediterranean-style diet have longer lifespans, report a higher quality of life and are less likely to suffer from chronic diseases such as cancer and heart disease.”

The American Heart Association says the Mediterranean diet can “play a big role” in helping to prevent heart disease and stroke and reducing risk factors like diabetes, high cholesterol and high blood pressure. Consuming virgin olive oil, in particular, may help the body “remove excess cholesterol from arteries and keep blood vessels open,” according to the AHA.

Is the diet adaptable and budget-friendly?

In U.S. News and World Report’s 2023 ranking of best diets, the Mediterranean diet was not only best overall diet but also rated high in the categories of Best Family-Friendly Diets and Easiest Diets to Follow.

Schueller said the foods promoted in the Mediterranean way of eating are not only budget-friendly and easily accessible but also adaptable.

“Olive oil is one of the cores of the of the Mediterranean diet as a primary source of healthy fat, but you can replace that with a similar oil like grapeseed oil or sesame oil or another heart-healthy, fun saturated fat like nuts or avocado,” she said. “And you can take those principles and adapt them to other cuisines by adding the vegetables and whole grains from that country or region, lowering the red meat [intake] and eating more efficient plant proteins.”

She continued, “For example, if you prefer Asian cuisine, you can apply the Mediterranean diet principles and that might mean eating more brown or black rice instead of white rice, and seafood or tofu instead of meat.”

What is a sample recipe?

Maya Feller, a registered dietitian and nutritionist, shared this recipe for vegetable tagine, which follows the tenets of the Mediterranean diet. 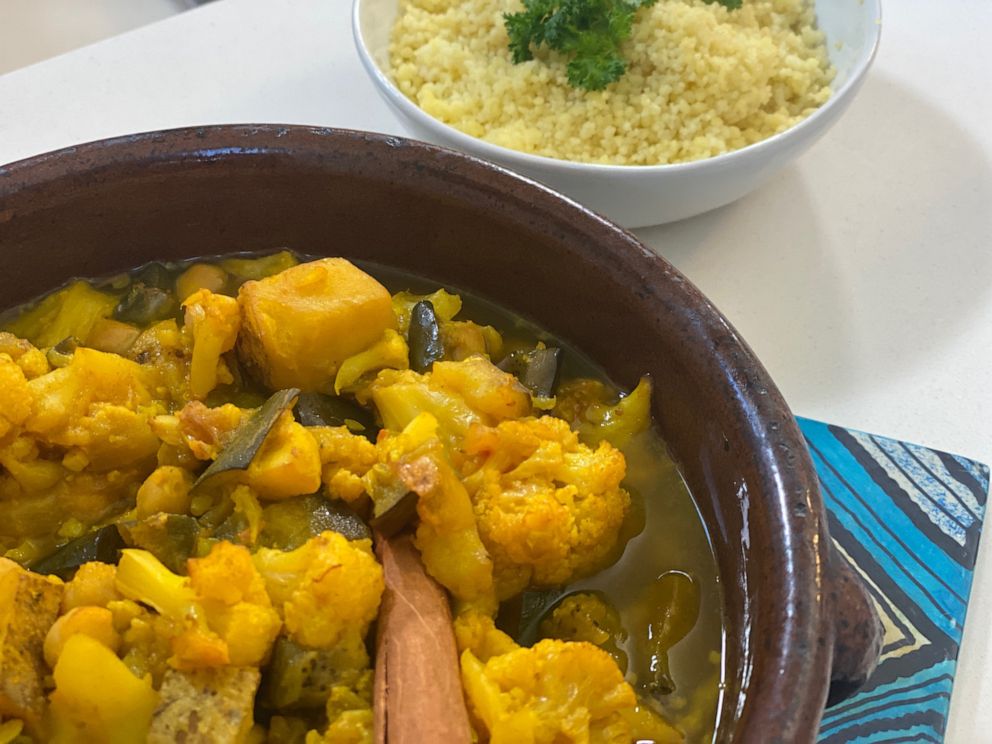 3. Add chickpeas, saffron, cinnamon stick, and 15 oz of water and cook for 10 minutes.

5. Spoon vegetables into a shallow bowl over couscous and garnish with fresh mint and parsley.