Rich and creamy homemade ice cream made with, yes, extra virgin olive oil (E.V.O.O. I.C. if you will). The bright, fruity, and nutty flavors of olive oil translate surprisingly well in a sweet application like this one. You have to taste it to believe it!

While I’m not always one to embrace unusual ice cream flavors (ok I take that back, I totally am), this recipe deserves to be shared. I know olive oil is most often used in savory dishes, but don’t write it off so quickly—it makes for an ultra creamy homemade ice cream that’s somehow both bold and delicate in flavor at the same time.

Like last summer’s fresh bay leaf ice cream, and the summer before that’s sourdough ice cream, this summer’s unusual ice cream flavor will most certainly surprise you. Or maybe it won’t considering the name of this blog and all.

To be honest, I’m surprised it’s taken me this long to do an olive oil ice cream recipe, for obvious reasons. After last month’s olive oil chocolate loaf cake, which is already a hit with readers, I’m rather tempted to olive-oilify all the things. I’ve done cookies and mashed potatoes, brownies and rice krispie treats… but really, anything that typically calls for butter or any other kind of oil/fat would be possible to make with olive oil instead.

And even things that don’t usually call for butter or oil. Like, say, ice cream? 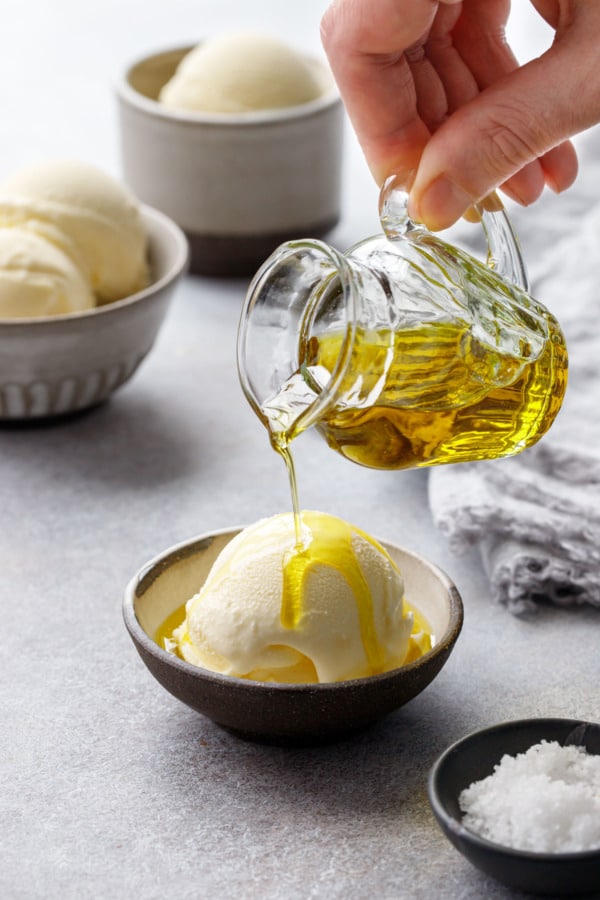 I expected that olive oil ice cream would be tasty, no doubt there, but I didn’t expect it to leave me at a loss for words to describe just how good it really is. Honestly, it really has no right to be this good. Even Taylor commented that it’s one of the best ice creams I’ve made (which, if you’ve been a reader here for any length of time you’ll know that such praise from Mr. Plain-ass-chocolate is rare indeed).

It’s somehow the creamiest ice cream you’ve ever had, butterier than if it was made with actual butter, and yet still with an underlying brightness that announces itself the second it touches your tongue, shouting, “THERE IS OLIVE OIL IN THIS ICE CREAM AND IT IS GOOD” (you know, just in case the signals haven’t reached your brain yet).

It is so much better than vanilla.

I think this ice cream would be lovely served with fresh summer fruit, a bittersweet chocolate sauce, or even a drizzle of aged balsamic vinegar. Or you can really blow some minds and serve a scoop of this on top of my olive oil chocolate loaf cake. 🤯 Oh yes indeed. 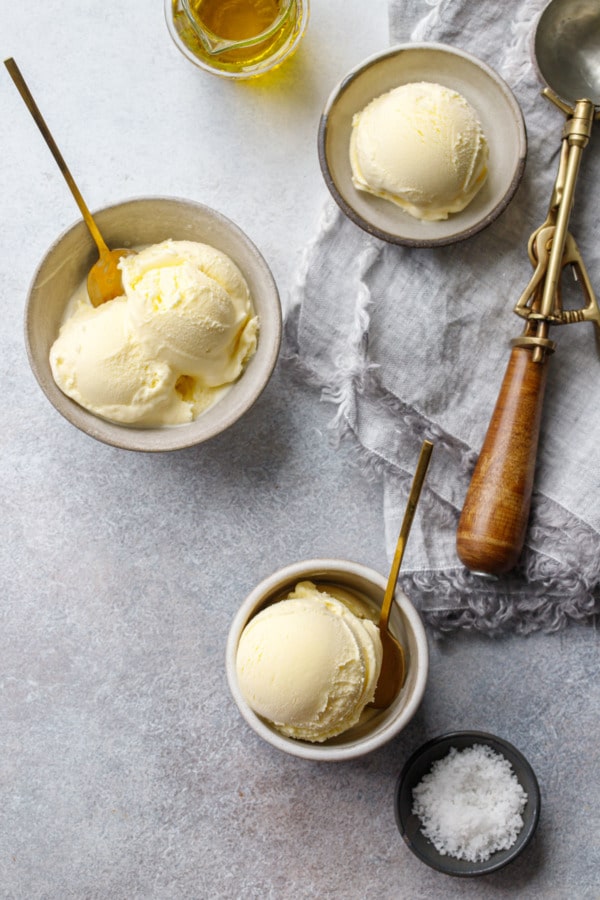 The olive oil in this recipe serves multiple purposes, both to add flavor as well as fat, which results in an ultra-creamy final product no matter how you churn it.

I tested the recipe two ways, once by whisking the olive oil in with the egg yolks before the mixture is cooked and chilled, and a second batch where I added the olive oil just before churning (so the oil is never heated).

The taste difference between the two was surprising. While the first batch was undeniably delicious, it lacked any obvious olive oil flavor. The simple act of heating the oil, even to a mere 170 degrees, diminishes the nuances of flavor of the oil. The resulting ice cream was undeniably rich and buttery, with mild, nutty undertones (I thought it tasted like macadamia nuts). It was obvious there was something in there beyond cream and sugar, but it wasn’t a distinguishable flavor that could be easily identified.

The second batch, however, was much more obvious in its provenance. It still had the buttery rich and nutty undertones, but also flaunted the more delicate, nuanced flavors that you’ll find in really good extra virgin olive oil: ripe summer fruit, bright citrus, roasted nuts, fresh cut grass or tomato leaves, with a hint of peppery spice. And somehow, all these flavors combined with the cream and sugar to produce a simply spectacular ice cream.

I’d recommend using a decent quality olive oil here, since the flavor really does shine through in the final product. Make sure it’s fresh too, as olive oil does go bad, so if your bottle has been open more than a few months, I’d definitely recommend picking up a fresh one. Something bright and fruity or buttery and nutty would be best here, as opposed to an oil that’s more grassy and peppery (but that’s just my personal preference when it comes to olive oils). 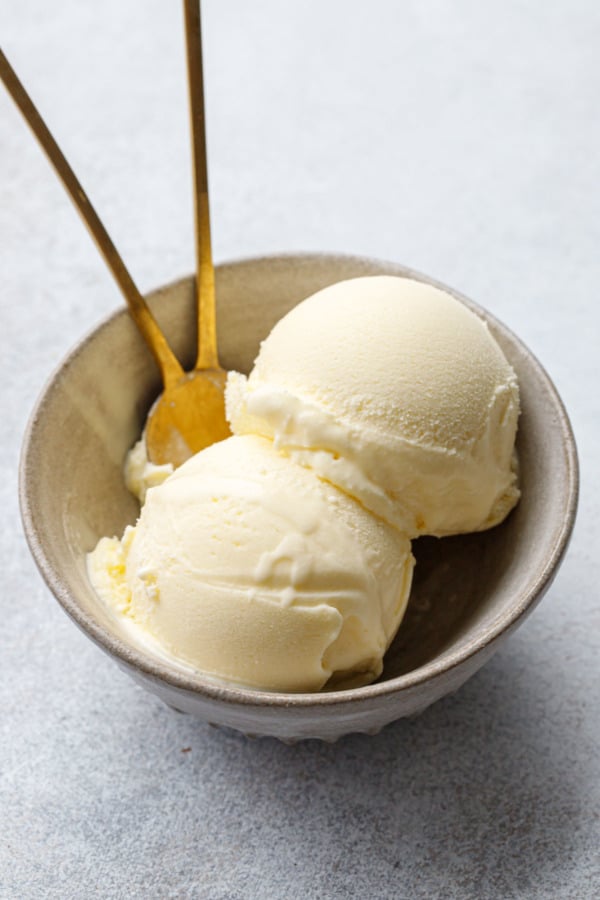 Technically, gelato is just Italian ice cream. Although, if you’ve had both, you’ll be familiar with their notable differences.

Typically gelato has less air incorporated in the churning process. It is also served at a warmer temperature than ice cream, hence the softer appearance and creamier texture. Gelato is also made with a higher proportion of milk versus heavy cream—this lower percentage of butterfat leads to more pronounced flavors (the warmer serving temperature also helps with that).

But gelato is really hard to achieve at home (I’ve yet to encounter a machine that can make true gelato). Most home ice cream makers simply can’t freeze fast enough to produce those super fine ice crystals needed for a silky smooth texture; as a result, we find ourselves adding more fat (i.e. egg yolks) to make up for the difference in texture, which is why most homemade gelato recipes tend to include extra egg yolks to mimic that richness.

While I’m calling this recipe olive oil ice cream because it has egg yolks and thus is not really true gelato, hopefully the people out there searching for olive oil gelato will still come across this recipe and not immediately write it off, because trust me, this recipe is a keeper. 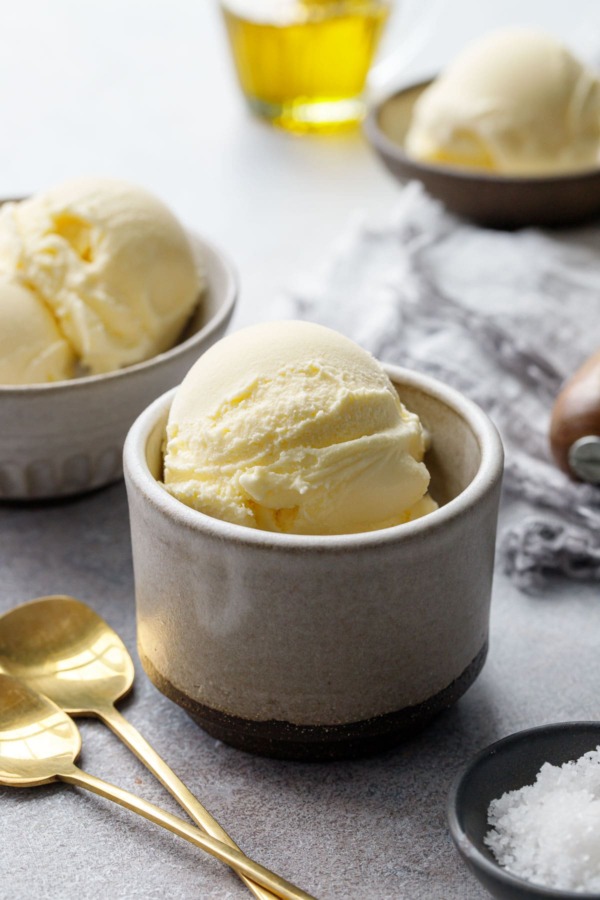 Salt of the Earth Sea

Salt is a critical ingredient in ice cream (colder temperatures tend to tamp down our tastebuds, so the salt is critical to amplifying flavors). Without it, ice cream would be dull at best. (Rock salt was also traditionally used to churn ice cream since it brings down the temperature of ice below freezing, allowing the liquid ice cream base to freeze. But this is totally different from the salt that is used in the ice cream; that’s all about flavor!)

In this recipe I used some lovely fleur de sel, which is a high-quality French salt made from sea water and brings with it the lovely, delicate flavor of the sea. Like a breath of fresh sea air. You can also use regular sea salt or Diamond Crystal kosher salt, but do avoid table salts with additives or anti-caking agents. 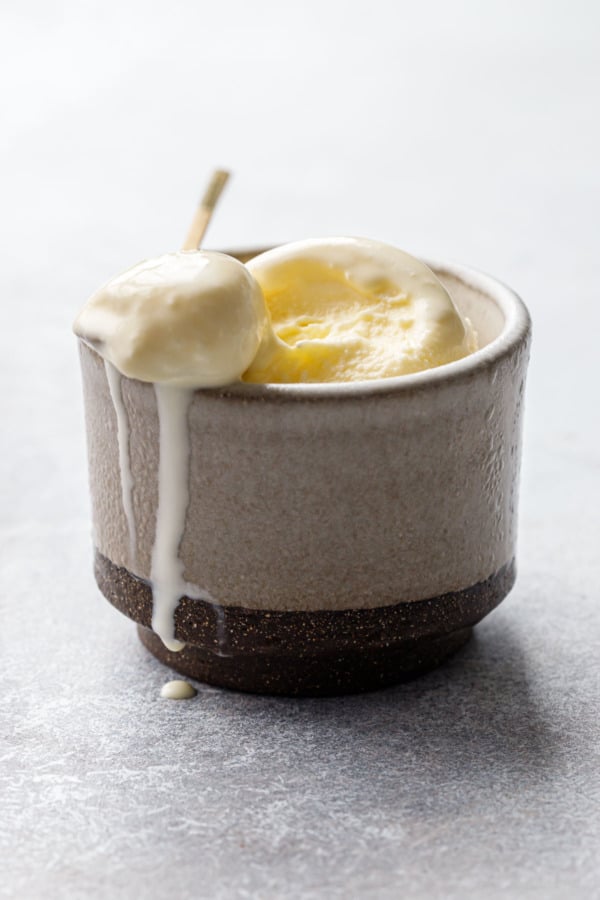 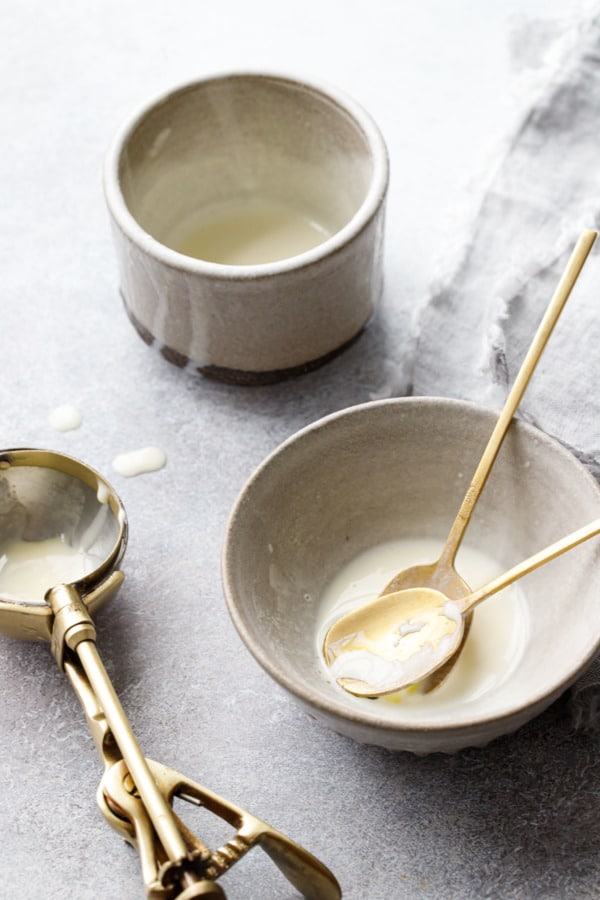 Right out of the machine, homemade ice cream will be more like soft serve ice cream. Transfer it to your freezer container and then let it firm up overnight to achieve a scoop-able consistency.

I have a few different containers for storing homemade ice creams, some insulated, some not. I often just use plain paper ice cream cartons which I can then label and date (and reuse at least once or twice if you scoop from it gently, just rinse out the inside and let dry). When storing homemade ice cream for more than a few days, I recommend pressing a piece of parchment paper or plastic wrap on the surface of the churned ice cream to prevent freezer burn.

That said, it’s really best enjoyed within a month or so of making it; beyond that and the texture will start to degrade (there aren’t, afterall, any of the fillers or gums that are often improved to extend the shelf life of commercial ice creams).

Rich and creamy homemade ice cream made with, yes, extra virgin olive oil (E.V.O.O. I.C. if you will). The bright, fruity, and nutty flavors of olive oil translate surprisingly well in a sweet application like this one. You have to taste it to believe it! 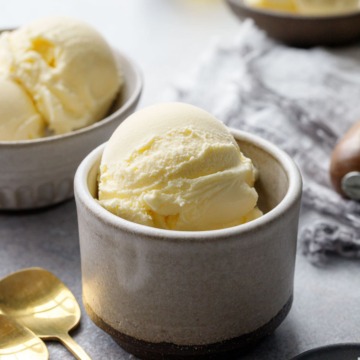 Did you make this recipe?

There may be affiliate links in this post. We are a participant in the Amazon Services LLC Associates Program, an affiliate advertising program designed to provide a means for us to earn fees by linking to Amazon.com and affiliated sites.

The Advisory Committee meets again after a year