get fresh recipes via email:

This hearty kale salad is anything but boring: tossed with tangy lemon and flavorful pecorino cheese and topped with nutty farro, crunchy sourdough breadcrumbs, and tart dried barberries.

The addition of nutritious farro makes this salad suitable as a meal unto itself, perfect for lunch or a light dinner, though it’s also lovely served as a side salad alongside some grilled chicken or seared steak.

As our friend Richard used to say… it’s delicious AND nutritious!

While the original recipe is near perfect, we wanted to make it a bit more substantial and filling as a meal in and of itself, hence the addition of farro. We also used homemade sourdough for the breadcrumbs, added barberries, and tweaked the process a little bit (adding the cheese separately versus mixing it all together makes for more even distribution and less clumps). Also, twice as much cheese and garlic (as you do).

This recipe works with any kind of kale; the original calls for lacinato (the darker, dino-skin looking stuff); we used curly kale here since I love the texture and lift: it doesn’t collapse under the weight of the farro. 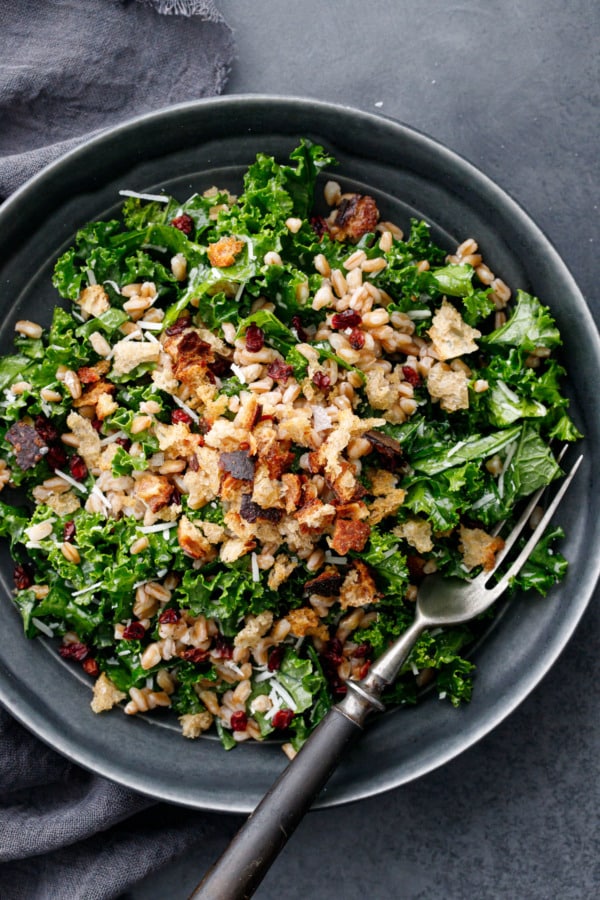 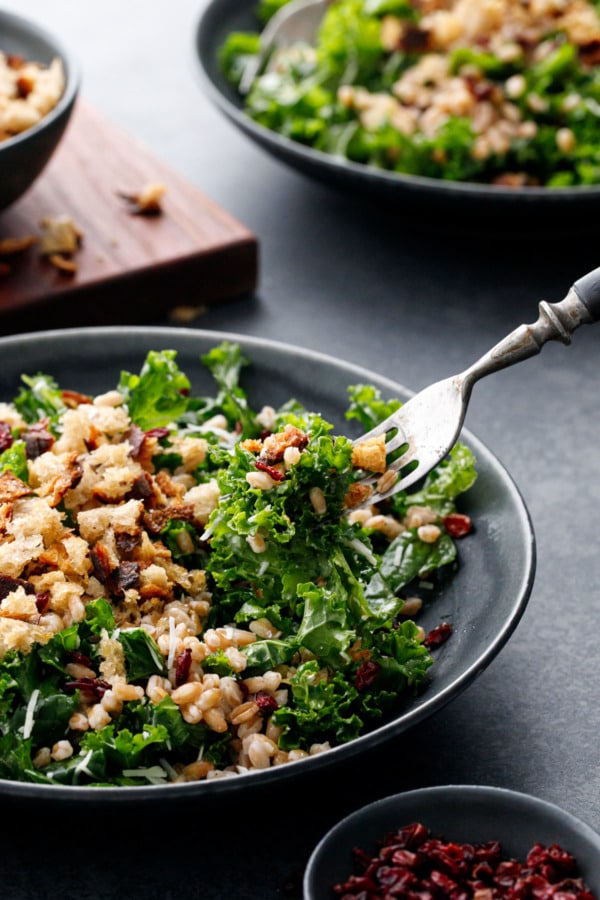 One bonus of kale salads like this one: they almost get better the longer they sit, making this a perfect make-ahead recipe. The bitterness of the kale gets mellower the longer it mingles with the dressing.

You can toss the kale and farro with the dressing and cheese up to a day ahead of time; then just add the barberries and breadcrumbs before serving. 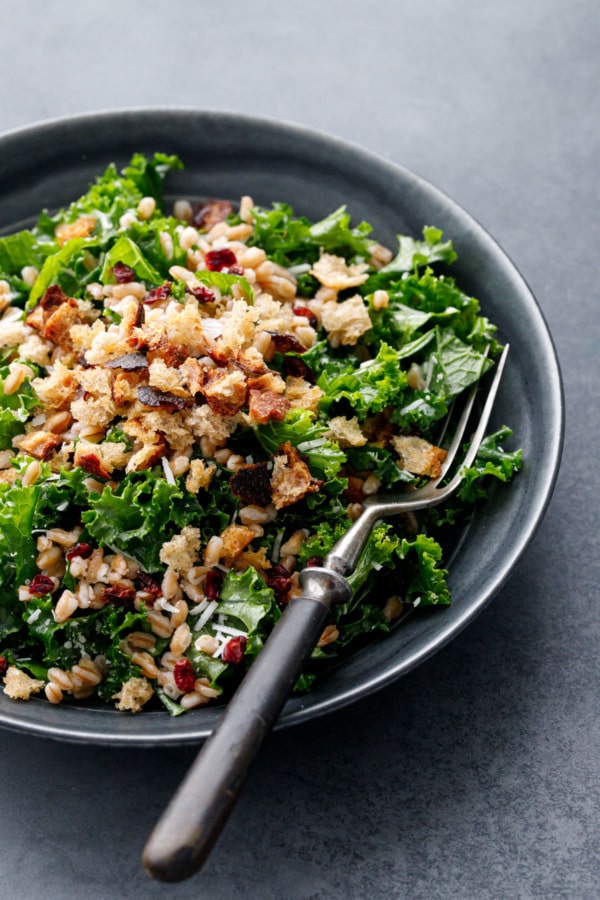 Farro is a protein-rich grain in the wheat family, which takes on a chewy texture and nutty flavor when cooked. It’s an excellent source of protein, fiber, and other beneficial nutrients.

Whole farro will take about 30 to 45 minutes to cook, less if you soak it beforehand. However, if you can get your hands on pearled or quick-cooking farro (Trader Joe’s has a version that we love), you’ll be in and out of the kitchen even faster.

If you’re not sure which kind of farro you have, just refer to the cooking instructions on the package. 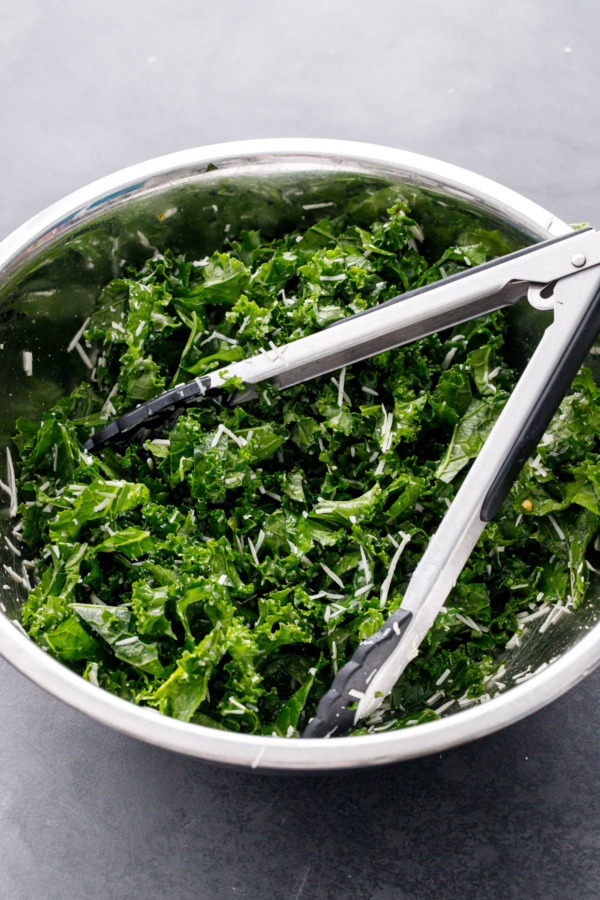 Honestly though the breadcrumbs may be the best part of this whole salad, adding a delightful crunch and a punch of salt and fat that cuts the bitterness of the kale.

Sourdough bread makes for lovely, rustic crumbs with a super satisfying crunch, but will work with any crusty, more rustic-style breads. Something like a baguette or ciabatta, for example.

The best bread for breadcrumbs is slightly stale, that old heel you have in the back of you fridge would be perfect. If your bread is fresh, cut off a few slices and let them sit out overnight to dry. I tear my bread by hand, but you can also pulse it briefly in a food processor.

Pre-made panko breadcrumbs will also work in a pinch. 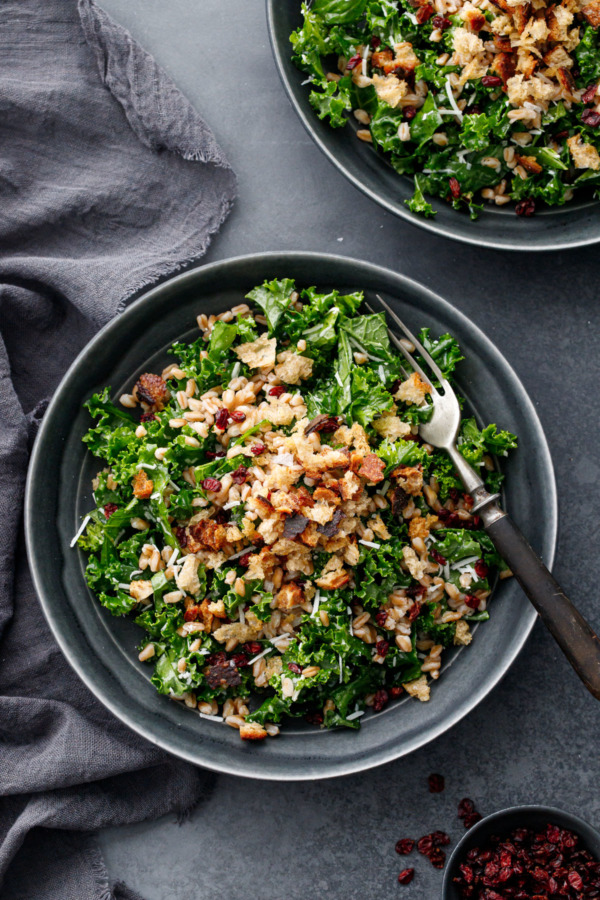 Barberries: These tart dried fruits are more common in the UK, but not as easy to find in the US. I’ve purchased them from Nuts.com as well as World Spice (though the later no longer seems to have it on their site), but you can find them on Amazon as well.

In place of barberries you can use dried cherries, dried currants, or dried cranberries.

Pecorino: I wholeheartedly believe that pecorino is far superior to parmesan, but you can use the later here instead if you prefer.

Farro: We used quick cooking farro here, but you could replace it with just about any grain. Quinoa, bulgar, barley, israeli couscous, or even brown or wild rice would be great here!

This hearty kale salad is anything but boring: tossed with tangy lemon and flavorful pecorino cheese and topped with nutty farro, crunchy sourdough breadcrumbs, and tart dried barberries. 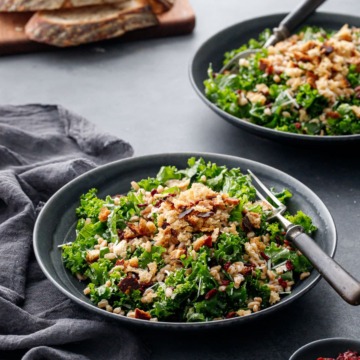 Did you make this recipe?

There may be affiliate links in this post. We are a participant in the Amazon Services LLC Associates Program, an affiliate advertising program designed to provide a means for us to earn fees by linking to Amazon.com and affiliated sites.

What to eat when you have COVID